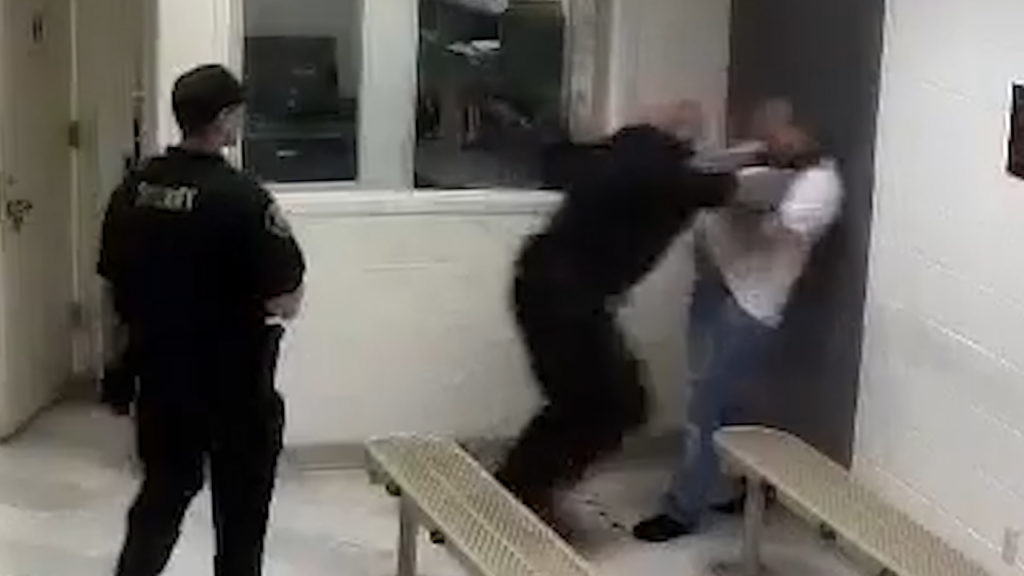 By Jayati Ramakrishnan and Maxine Bernstein

The Washington County board of commissioners voted Tuesday to authorize a $625,000 payout to settle a lawsuit brought by a former inmate whose skull was fractured in what appears to have been an unprovoked attack by a county sheriff’s deputy in the jail’s booking area in 2018.

“For that we’re truly sorry,” the statement read.

The settlement was reached days before the county district attorney’s office is expected to go before a grand jury to seek a felony second-degree assault indictment against the deputy, Rian Alden. Oregon law caps payouts in suits against municipalities to $700,000.

The case has spurred the Washington County District Attorney’s office to reform how it handles similar cases in the future, officials there said.

Molina was accused of riding a bike while intoxicated and was being booked into the Washington County Jail March 30, 2018.

A jail video released by Molina’s attorneys shows Alden directing Molina to stand against a back wall so he can take his booking photo. Molina appears to salute or gesture at Alden a few times. Alden gestures at Molina, as if trying to instruct him. Molina holds a hand up near his chest, making another gesture at Alden and appears to say something to him.

Within seconds, Alden runs out from behind the desk, slams Molina to the wall, appears to grab his neck, pins him to the ground and straddles him. Three other deputies come over, and one appears to help Alden hold Molina down. Almost immediately, some other staff come into the room with medical equipment. Alden continues to hold Molina down, face down.

Molina’s attorneys first filed a lawsuit against the county in 2019 after the alleged assault took place, citing major injuries and medical expenses that exceeded $135,000. He spent 19 days in the hospital, including five days in the intensive care unit.

The lawsuit listed Molina’s injuries from the assault, including a traumatic brain hemorrhage, a skull fracture, injuries to the tissue near his spine, a loss of consciousness, hearing loss and headaches.

The case was initially brought to the county district attorney’s office for review in 2018.

Molina’s attorney, Jason Kafoury, said he appreciates the county’s commitment to improving oversight of the sheriff’s department and jail. He called for further scrutiny on local law enforcement, and more attention to the violence prisoners face. He also asked the Oregon Legislature to establish an independent, state-wide unit to investigate serious injury and death cases.

“It is important that all parties appreciate just how far short they have fallen up until now and how the case of Mr. Molina illuminates those failings,” he said.

The decision not to prosecute Alden was made after neither of the outside investigators – from the Multnomah County Sheriff’s Office and the Oregon State Police – nor the district attorney’s office sought or obtained Molina’s medical records that documented serious injuries, Washington County Chief Deputy District Attorney Bracken McKey told The Oregonian/OregonLive.

“We got this one wrong, and we own that,” McKey said. “There’s no excuse for this when it comes to our office’s initial decision not to prosecute and not getting all the information we needed to get.”

That same video, along with Molina’s medical records, is now being used to seek a felony indictment against Alden for second-degree assault.

Johnson has since left the district attorney’s office and works for a law firm in Portland. Johnson did not return a message seeking comment.

In the decline to prosecute memo, Johnson explained why the office would not pursue second-degree official misconduct charges against Alden.

“Mr. Molina has stated he has no recollection of his arrest or anything that transpired at the jail,” wrote Johnson, who at the time handled the district attorney’s misdemeanor unit.

Johnson also referenced the accounts of other witnesses, Alden’s co-workers, in the memo.

“The few witnesses on scene are inconsistent in what they saw and heard,” she wrote. “The video is of minimal value because it captures only one view and has no audio feed.” She followed up the memo eight days later, clarifying that she did review two separate video views of the jail incident.

The renewed interest in the jail assault case came after the district attorney’s office saw an article on OregonLive.com in early June about an investigation into Alden for an alleged racist email, McKey said.

“It’s unfortunate that it took a racist email for us to review any cases we had with the guy,” McKey said.

The Washington County Sheriff’s Office learned of the email allegation involving Alden May 31 and placed him on paid administrative leave the next day. The sheriff’s office said the email appears to be over 16 years old and was sent in 2003, four years before the deputy started working for the agency.

The email is filled with racist slurs and at one point said, “Oh, I’m sorry, that was Racist, but I guess I am.”

Alden’s attorney, Dan Thenell, called it unfair that the district attorney’s office is prosecuting Alden after previously choosing not to and after an internal affairs finding that his force didn’t violate policy.

“The video does not show what a person perceives,” Thenell said. “This is all about politics because of what happened in Minneapolis to George Floyd.”

The case has led the Washington County District Attorney Kevin Barton to change his office’s handling of any alleged use of force case involving an officer or sheriff’s deputy.

The prosecution team will ensure all medical records are obtained, and prosecutors consult with use of force experts who are outside of the agency that employs the officer whose actions are under review, McKey said.

Changes to the sheriff’s office

“I own this,” Garret said. “I will not be pointing fingers at anybody else. Part of being responsible is taking steps to fix it.”

The sheriff’s office now will reach out to outside experts on any allegations of use of force and is considering calling in a national expert to review the office’s use of force policies.

Garrett said he was the one who decided to bring in the outside detectives in 2018.

“When I first saw the video, it was difficult to watch,” Garrett said, referencing his reaction when the case first came before him in 2018. “I thought, we’ve got to get someone outside to look at this.”

After the district attorney’s office declined to prosecute, internal affairs investigators from the Washington County Sheriff’s Office reviewed the incident to determine whether Alden violated any sheriff’s office policies in an administrative review. Garrett said sheriff’s trainers and use of force experts were involved in the determination that there were no policy violations by Alden.

“It wasn’t a rubberstamp,” Garrett said. “There was some spirited debate.” The sheriff called the matter then “a close call.”

In the county’s initial answer to Molina’s civil suit, Washington County Counsel Christopher Gilmore wrote in court records that Alden’s force was justified and that he acted in self-defense in response to Molina’s “drunk and disorderly behavior, his verbal statements attempting to solicit a fight, his physical gestures in moving towards Deputy Rian Alden with his fists clenched.”

Alden wrote in his use of force report that Molina suffered a “minor” head injury in a report approved by sheriff’s Sgt. Shane Siemiller. According to Alden, Molina “took up a fighting stance and challenged” him to fight. Alden said when he asked Molina to turn for a side booking photo, that Molina responded with a vulgar remark, followed by “What’s up? and flipped him off, the report said. He suggested that “What’s up?” is a question gang members use ‘to challenge someone to fight,” though he had no idea if Molina was involved in a gang.

After Alden slammed Molina against the wall and then took him to the ground, another deputy present, Josie Kringelhede, wrote in a report that he pressed an emergency duress pager. Other deputies present noticed Molina went unconscious and was bleeding from his nose. Molina regained consciousness but couldn’t answer questions beyond a yes or no. He was taken by ambulance to Legacy Emanuel Medical Center.