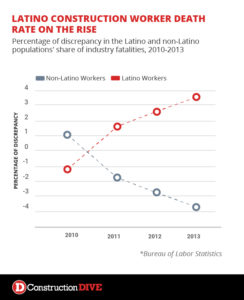 According to Jorge Perez, the director of the Hispanic American Construction Industry Association, (HACIA) there are numerous reasons for the increase in Latino workers construction fatalities. The primary reason that Perez points to is a lack of safety awareness by workers and contractors. Lack of safety training, coupled with a lack of available training for construction workers in their native Spanish language, are important factors that can lead to fatal accidents in the workplace, according to Perez.

Who regulates the safety and training standards for construction sites? The Occupational Safety and Health Administration (OSHA). But OSHA appears to be severely undermanned to monitor every construction site. A report from the American Federation or Labor and Congress of Industrial Organizations (AFL-CIO) found that OSHA employs nearly 2,000 inspectors who are responsible for 8 million work sites under their jurisdiction. This means that each inspector is responsible for the health and safety standards of about 4,000 worksites.

Furthermore, the penalties that OSHA issues to contractors who fall below the industry standard for safety and training are miniscule. The AFL-CIO report detailed that the average penalty for workplace fatality cases was $6,100 by state OSHA inspectors, and $5,600 by federal OSHA inspectors. In criminal cases, where the penalties rendered include fines and possible prison time for “willful violations” that resulted in worker death, only 84 cases have been prosecuted since 1970, and defendants served only 89 total months in prison.

Our firm, Kafoury and McDougal, with the assistance of co-counsel Lourdes Sanchez, won $6.2 million for an Hispanic agricultural worker, Zeferino Vasquez, for a workplace accident that left him paralyzed. The 21-year-old Vasques was hurt during his shift for OR/PAC Feed and Storage where he made $9.15 an hour. The injury occurred while Vasquez was in operation of a hay bale slicer that was manufactured by Double Press Inc. who was the defendant in the lawsuit.

The jury found that the manufacturer was 60% responsible for Vasquez’s injuries. A lack of safety standards and training, including lack of safety training in Spanish for the mostly Hispanic workforce, was used as evidence against Double Press Inc. Double Press did not keep records of the injuries caused by their equipment and had not even reviewed OSHA regulations concerning their equipment.

After the verdict was rendered, Vasquez’s attorney Greg Kafoury pointed out that many of these types of agricultural accidents against Hispanic workers go undocumented or are not reported.

“These guys don’t have unions,” Kafoury said. “They are incredibly vulnerable. A lot of them have immigration issues, so they really are at the mercy of the machine makers and the employers… If you had this kind of injury pattern with white college kids working summer jobs, this industry would have been cleaned up in a heartbeat.”

UPDATE: Nightly Show host Larry Wilmore touched on the above statistics during the telecast on Tuesday, May 5th 2014. Check out the video of the segment from Comedy Central’s website here

Information for this blog was obtained using www.hispanictrending.net