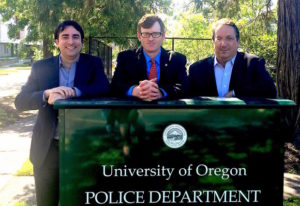 Today, a federal jury in Portland awarded $755,000 to James Cleavenger, a former public safety officer at the University of Oregon who claimed retaliation and loss of his law enforcement career at the hands of the University of Oregon Chief of Police and two commanders. The jury found that defendants Chief Carolyn McDermed, Lt. Brandon Lebrecht, and former Sgt. Scott Cameron violated Mr. Cleavenger’s First Amendment free speech rights for speaking out on police policy and matters of public concern, of which his superiors disapproved. As a University of Oregon law student in 2008, Cleavenger spoke out against arming the University of Oregon officers with tasers without proper training and a use of force policy with input from the campus community. Evidence at the trial showed that defendants resented his comments at the time, were baffled that he was later hired by the department, and the jury found that because of his taser speech this lead to papering his file and terminating him. The jury also found Cleavenger was secretly placed on the Lane County District Attorney’s “Brady List,” a process which blacklists officers found to be “dishonest,” effectively ending an officer’s law enforcement career.

Attorneys including Doug Park, University of Oregon’s Acting General Counsel, participated in the decision to “Brady List” Mr. Cleavenger. The University of Oregon was represented by Andrea Coit of Harrang Long Gary Rudnick P.C. in Eugene, who participated in the efforts to have Cleavenger “Brady Listed.” The decision to “Brady List” Cleavenger came immediately upon the heels of the decision by a neutral arbitrator that Cleavenger’s firing was improper and that he was entitled to reinstatement. The arbitrator further rejected all of the department’s accusations of dishonesty by Cleavenger. Despite the Arbitrator’s decision, UOPD tried to renew these claims of dishonesty by Cleavenger without providing the DA the Arbitrator’s actual decision, in a deliberate attempt to try to block Cleavenger’s reinstatement and in retaliation for Cleavenger filing his lawsuit.