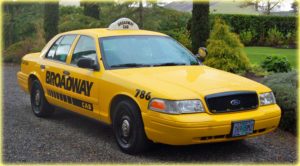 Cab driver Eugene Stacy was having lunch at Plaid Pantry in the early hours of the morning as he worked the night shift. A man got into his car and demanded to be taken “down Union Avenue.” Stacy explained that he didn’t take people on trips if they did not have an address that they were going to, and, in any event, he was having his lunch.

Angry, the man left. Shortly thereafter, Stacy went into the store to buy something more, and the man entered and confronted him. The man loudly exclaimed that he had just gotten out of the Oregon State Penitentiary, recited off his inmate number, and said, “I don’t mind hurting somebody else.”

The 235-pound clerk later testified that the confrontation lasted some ten minutes before the stranger hit Stacy with a hard left hook, shattering Stacy’s jaw. The man then fled the scene. We sued Plaid Pantry based on the failure of the clerk to intervene, to call the police, or to even threaten to do so.

During the clerk’s deposition, we learned that on his first day of the job, he had been given two baseball bats and an iron bar, and told that if anyone gave him any trouble, he was to “beat them and beat them and beat them.” The clerk explained that calling the police was not his job, and, in any event, he was not to leave his post since someone could reach into the till and take the money. The most money that was ever in the till was $25. Any amounts greater than that were immediately dropped into a lockbox.

The jury awarded compensatory and punitive damages of $420,000.