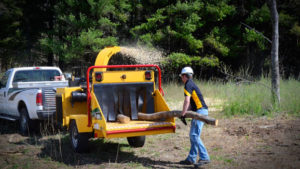 A 35-year-old father of three suffered brain injuries and a crushed skull when he was pulled into a faulty woodchipper head-first. The machine lacked basic safety functions like an automatic shut-off, the man claims in a $16.7 million lawsuit.

Noly Chouinard was pruning trees at work and grinding the limbs in a wood chipper when a rope on the ground behind him got tangled in the tree limbs he was feeding into the machine and pulled him into the blades.

Chouinard sued Vermeer Manufacturing Company, claiming it ignored overwhelming information about the hazards posed by its machines and kept making wood chippers that use deadly force without installing basic protections that are easily available to prevent deaths.

According to the Occupational Safety and Health Administration, wood chippers are one of the most dangerous machines used in the tree service industry. And the danger is only growing. Since 2011, six times as many tree industry workers have had an arm or a leg amputated by a wood chipper than the number reported in previous years.

Between 1996 and 2005, 39 workers died in wood chipper accidents. Most of those were pulled into the machine by either a body part, like their own finger, according to administration numbers.

Chouinard will suffer pain and disability for the rest of his life. And he doesn’t know how he will continue to care for his wife, infant, nine-year-old-daughter and eight-year-old son.

Kafoury & McDougal is working with Lourdes Sanchez to represent Chouinard in his claims against the manufacturer.

If you’re hurt while working, your employer’s workers’ compensation insurance company will usually cover your medical bills and lost wages. But workplace injuries are often the fault of someone other than your employer.

We can help you figure out whether government regulations or OSHA investigations will reveal third parties that are responsible for your injuries. You need an attorney who specializes in this field to know your legal rights.

If you or a loved one has been seriously injured at work, call Kafoury & McDougal.